A trip to Woodstock to see the lovely Woodstock Inn is well worth the drive. It's stunning holiday display just sing, "Wow!" What a delight.

Winter in Vermont can lead to a new hobby: Birding! If you're at all like me, you'll enjoy watching from your window the variety of birds that come literally to your doorstep. Here's more about how to have fun being a "winter birder."

To the lake, with this trio of Hills Point, Charlotte properties that our team sold in short order!

608 Hills Point is across the street from the lake and sold summer 2019. 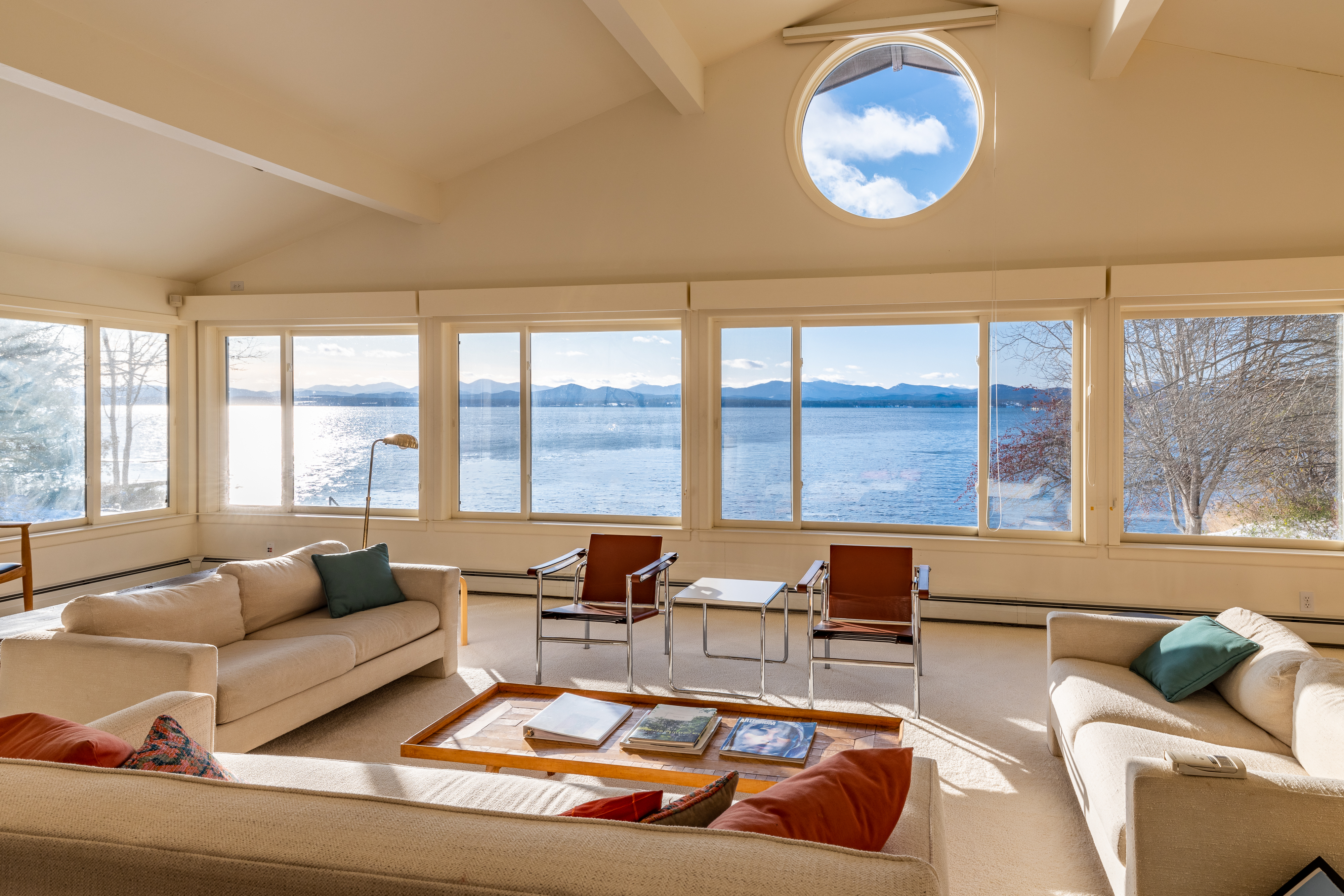 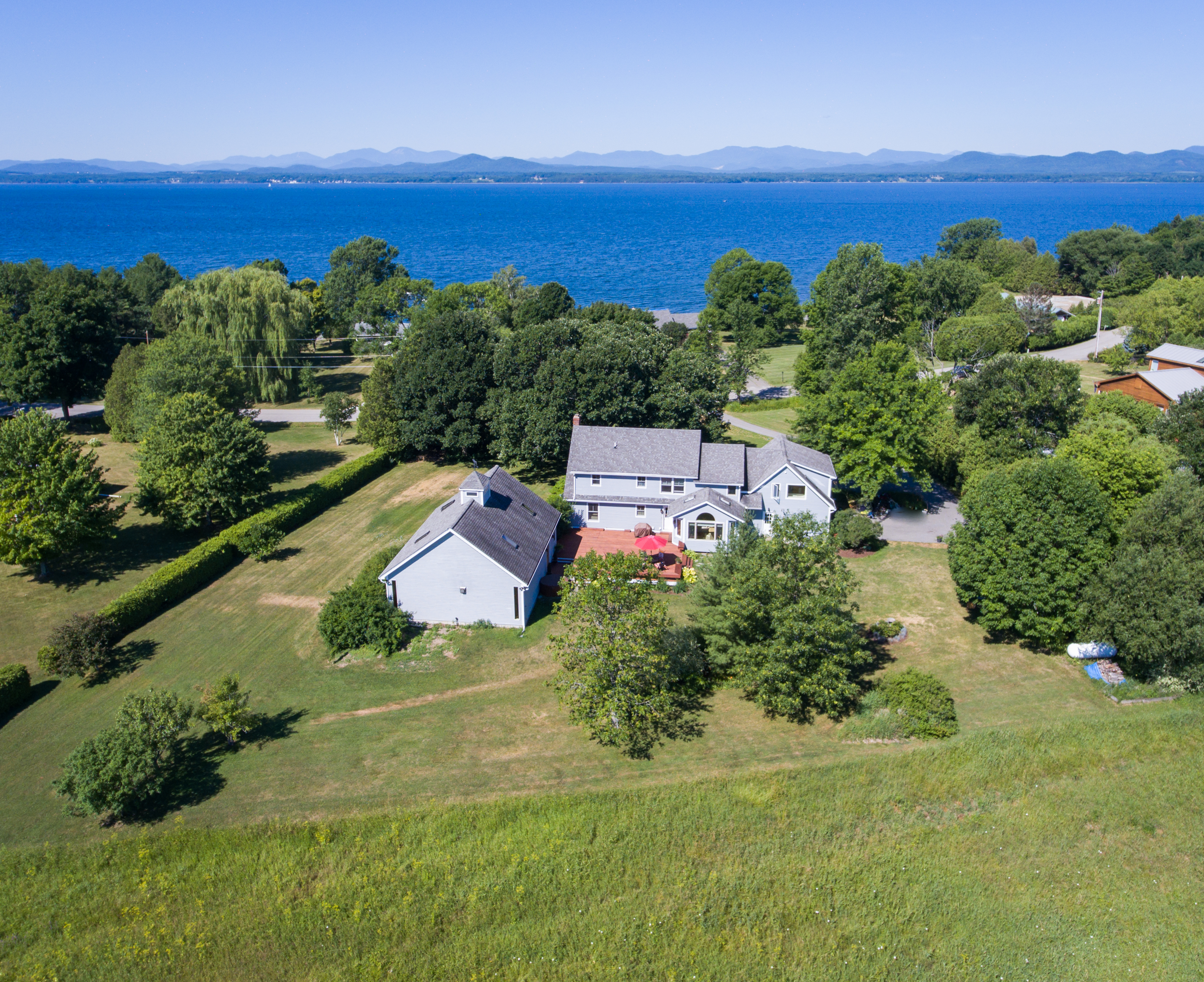 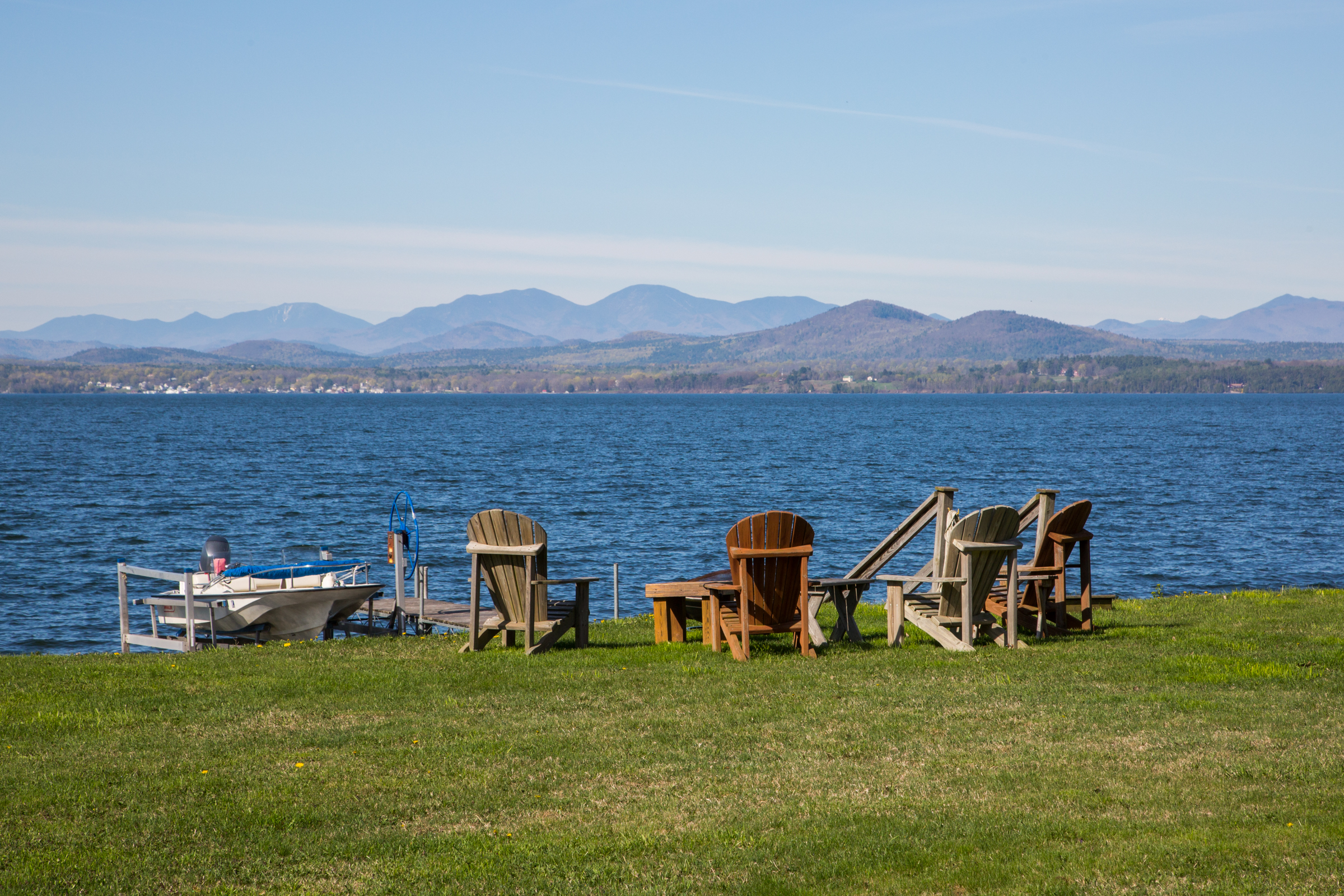 Snow came early here in Vermont and you might still see snow on some pumpkins as you stroll around town. But, more likely you'll see holiday lights glimmering, wreaths with their beautiful bows adorning homes and storefronts, and lovely vistas of snow-covered fields and mountains. The holidays are always a great time to be in Vermont and why not venture out to a place you haven't yet visited to experience the best the season has to offer!

Or head to Hotel Vermont in Burlington for one of its Mini Holiday Markets that features local artists and their wares, along with scrumptious hot chocolate, vinyl spinning seasonal tunes and a cozy fireside atmosphere that just can't be beat! https://www.facebook.com/events/501365834039597/

And, take your pick of one or more of these great restaurants that feature fireside dining and top-rate ambiance during the winter season. 7Days. gives you the skinny on all of them! https://www.sevendaysvt.com/vermont/seven-places-in-vermont-to-eat-and-drink-by-a-fireplace/Content?oid=28913918&fbclid=IwAR2RUcaBSXNJEpmV6FJmz9pXokh81hNjKw8VNb4_ahuEeDUdSq41VLhJEqw

Stay tuned for more ways to make the best of every day in the Green Mountain State!

Clients of mine moving from Sonoma to Vermont

This is the view from their home ..... see below

Does everyone know that this is a case of climate change ?

Bless our area being grey and cold !

Send some good thoughts  to these residents ! 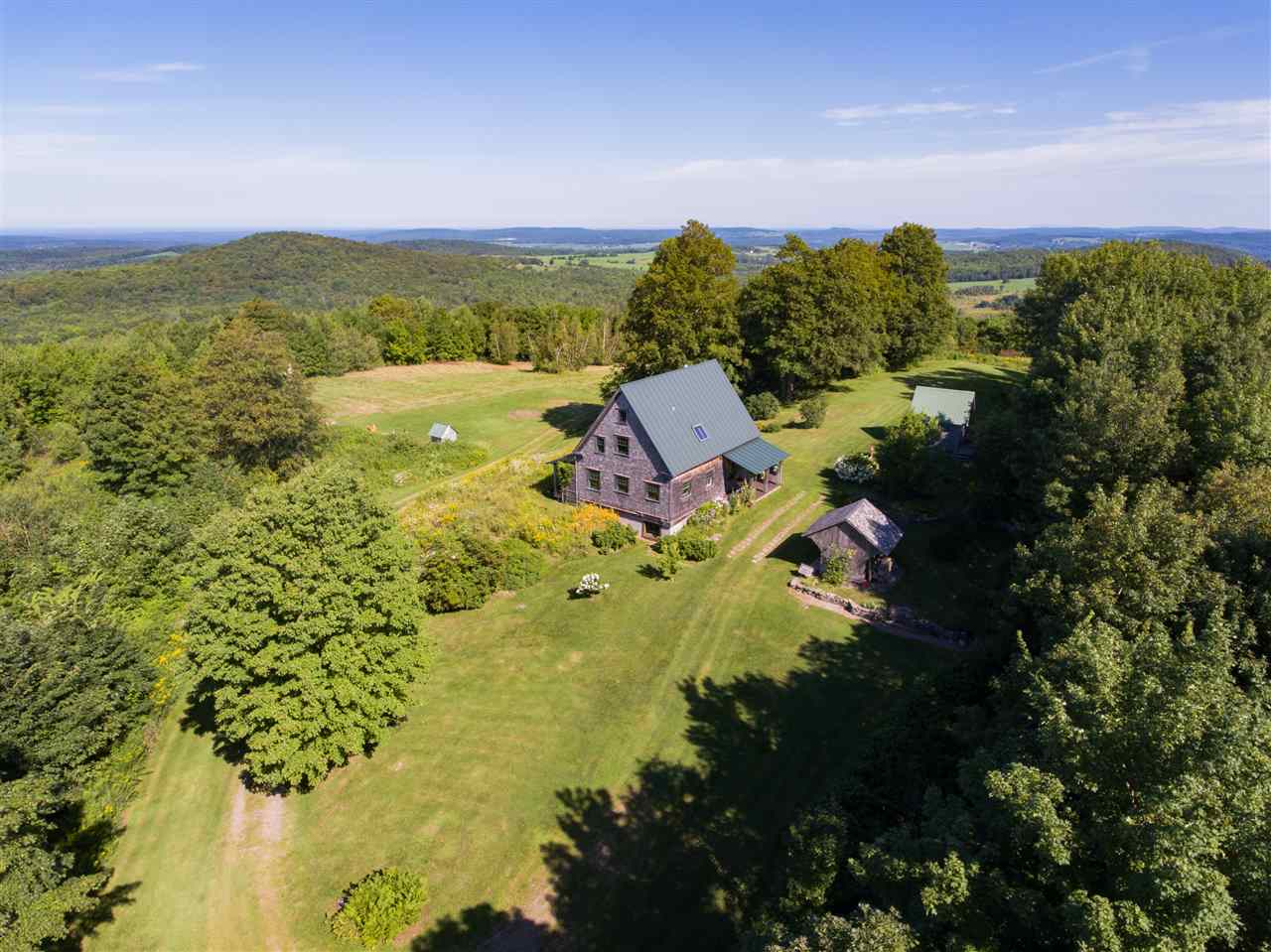 The Raven’s Nest
Building My Getaway
For many years during midlife, I led the transient
lifestyle of a commuting airline pilot. Twenty plus years of a
suitcase always open either coming or going. A life of splendid
vistas perhaps, but unending bouncing around from place to place
amidst chaos and noise. I longed for my little spot to retreat
to. And so, I spent many, many days off from the commute,
searching for a suitable spot that would provide the privacy and
peacefulness I longed for.
After several years of continuous searching, I found 4523
Duffy Hill Rd. more average than I had envisioned, but the spot
is breathtaking. I was hooked. The task would be daunting as
this was 105 acres of raw land, i.e. no electrical power; no
well and no driveway. And the building site I chose was a long
way uphill. AHH, but the potential was, and I dare say still is,
unlimited!
So, having made the decision to go ahead with a huge task,
I set about to design a house that would blend to the site and
be, at once, smallish cozy and efficient, yet open and airy and
take advantage of the splendid views.
For the six years until my forced retirement at age 60, I
spent countless hours in hotel and in the back of airplanes
whilst commuting, sketching and resketching plans. It had to be
simple, open and affect maximum utilization of space. It was at
times, very frustrating to blend the needs into an efficient
design. I learned a lot.

I was very fortunate to find a master wood working guru in
my neighbor Rodger Adkins. Rodger was eager to assist me with
the project and we hired another local carpenter to assist. The
three of us set to work enclosing the timber frame erected by
the Liberty Head Post & Beam Co. of Huntington, VT. The
adventure commenced the second week of July, 2002 and continues

yet, as there is no boundary on what this special site can
become.
I have now reached a turning point in age, relationships
and financial capabilities whence it is time to pass the torch
on to new owner(s), who are likewise smitten with this special
place and who also see the vast potential it holds. Fresh
visions will continue to enhance the natural splendor of this
spot.
I depart with the satisfaction that others will gather on
the porch, wine glasses in hand and converse in low tones about
the magnificent unfolding sunset, the deer in the meadow below,
and of plans for the X-country ski trail; or the sugar house, or
the guest house or...
The Raven’s Nest really is an as yet, unfinished canvas.
August 2017

Did you know there's a shrimp farm in Vermont

CHARLOTTE, Vt. (WCAX) When you think of Vermont agriculture, dairy or maple probably come to mind. But our Ike Bendavid found out that a shrimp farm has popped up in Charlotte.

What once was a dairy barn, is filled with 80,000 shrimp in a landlocked state.

Reporter Ike Bendavid: What do people say when you tell them you are growing shrimp in Vermont?
John Brawley: They kind of go, 'Whaaaaa??'

Brawley spent most of his career growing oysters in Massachusetts. The former UVM student decided to come back to Vermont to be a shrimp farmer.

The tanks are filled with a few thousand gallons of saltwater which took months to balance with the bacteria to keep the shrimp alive. The brown color of the water comes from the animals' food.

"The gist is maintaining water quality, preventing diseases, making sure the water is survivable for the shrimp," Brawley explained.

So why grow shrimp in Vermont? Brawley says shrimp are usually imported long distances from exotic locations. He says his farm-raised shrimp have nothing added to them and will bring a local and fresh ingredient to menus around the state.

"These shrimp will be unprocessed, head-on, which is hard to find because the shelf life for head-on shrimp is relatively short," Brawley said.

Ike Bendavid: When you hear shrimp from Vermont, what goes through your mind?
Dana Pontbriand/Vermont Meat and Seafood Market: The initial reaction is like, 'What?' It sounds pretty odd.

But not odd enough to stop Pontbriand from putting it on the market. The owner of Vermont Meat and Seafood plans to put the Vermont shrimp on their seafood shelves next to fresh seafood from around the world. He says educating customers is key.

"If shrimp were never frozen, that really matters to people. And if you are helping out a local business with us and him, I mean, it's a pretty cool story," Pontbriand said.

Shoppers say what they look for is quality.

"I found being in Vermont things taste good. So, if the shrimp taste good just like in the Gulf or anywhere else, I would buy it definitely," said Matt Miller of Pennsylvania.

Back at the farm, the big question is about taste and Brawley approves.

Some restaurants have featured the shrimp in events already this year but you can expect to see the shrimp on menus and in markets by the end of the year.

We are pleased to provide our noteworthy stats for the first half of 2019. We've accomplished some great results with our new website, paid search ads, print advertising, and social media. Click on the image below to view the full report from Four Seasons Sotheby's International Realty.

Contact the Kathy O'Brien Team for all of your Vermont real estate needs. We're happy to share our expertise with you! 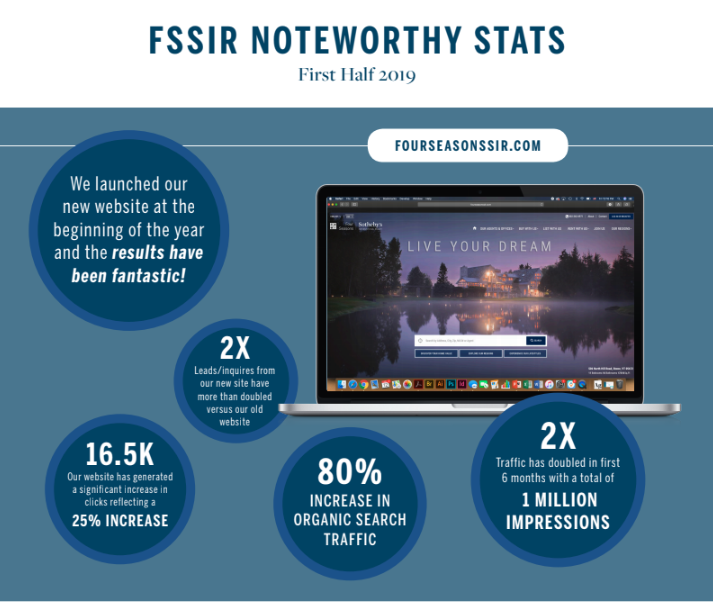