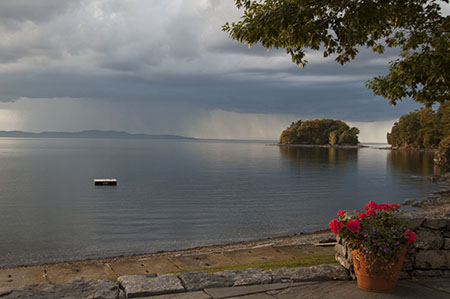 Welcome to Vermont -- a four-season playground for young and old alike, with so much to offer that it’s hard to know where to begin!

Lake Champlain is the gem that attracts visitors whatever the season, with 587 miles of shoreline that runs from its most northern tip at the Canadian border, down to the southernmost towns of Shoreham and West Haven. Hop from town to town as you head north along the lakefront.

Situated at the broadest point of the lake, Burlington is the vibrant heartbeat of the state. The largest city, Burlington offers in the state and heaven for foodies, with endless draft lists of local craft beers to be found wherever you settle on for a meal. Its lakefront boasts a bike path that runs eight miles from Oakledge Park at the south, north to the Winooski River delta. The bike path continues along the lake through Colchester onto a causeway across the lake that was built for trains originally, there’s even a bike ferry that takes you to the Islands with great views all along the way!

As you continue to head north, the local residents of the Champlain Islands (South Hero, North Hero, Grand Isle, and Isle La Motte) will greet you with warmth and hospitality. The islands are popular havens for artists and those looking for a relaxed pace of life. The locals are happy to offer their take on what to see and do during your visit. Grab a sandwich and take in the view at Hero’s Welcome or the North Hero House and its Pier Bar, farther south, check out Snow Farm Winery with daily tastings and frequent live music or the Blue Paddle for tasty bites as well.

The Green Mountains compete for everyone’s attention, with their majestic peaks, elongated ridgelines, they are recreational playgrounds all year round. Whether you’re wanting to ski or ride during the winter months or go hiking to take in the stunning fall foliage, make your way towards Mt. Mansfield with the iconic Stowe Village far below, or to Waitsfield and Warren with Sugarbush Resort, as well as the easily recognizable Camel’s Hump -- all offer hikes for every ability, and much to explore in their nearby towns and villages. Not to worry, you’re sure to see the quintessential white-steepled churches dotting the landscape along the way.

There is so much more to explore: Quechee Gorge with its breathtaking 165-foot drop Ottauquechee River, or Barre’s historic Rock of Ages Quarry, a staggering expanse that spans 550 wide, a quarter-mile long and plummets 450 deep to the bottom of the quarry. Vermont is full of such treasures. Do not forget to grab an ice cream cone from Ben & Jerry’s or one of the many local soft-serve shops.

We can offer many more great options and are just a phone call away. Touch base with us and we’ll find you just the spot to explore.

Stop back, as the following list grows frequently (and is far from exhaustive!). Take note, these links represent resources primarily within our market regions - Chittenden County, a portion of Addison County, and Grand Isle County. If you have questions or would like additional information about the local real estate market, contact The O'Brien O'Connell Team today!