About the Lake Champlain Islands 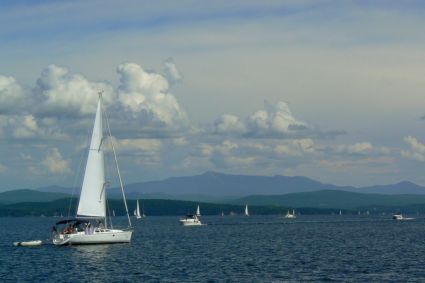 The Champlain Islands sit in the 6th largest freshwater lake in the U.S., Lake Champlain, which stretches from the border of Canada south 125 miles, its widest point being 14 miles across. The eastern shores border the western side of Vermont, while across the lake to the west, you'll find New York State. Thirty miles bottom to top, and 8 miles at its widest point, “the Islands” are made of five small towns, beginning with South Hero, then Grand Isle, North Hero, Isle La Motte, and finally Alburgh, together making Grand Isle County, population 7,000. Each Town has its own character while sharing two prevalent characteristics – a beautiful shoreline with picturesque mountainous backdrops.

The county's location is particularly attractive to those who appreciate the proximity to both Burlington, and Montreal. Many make the daily commute to Burlington; from the southern tip of the islands, the state's largest city is only 20 minutes south. Montreal is an easy day trip, not more than 1.5 hours just north of the border of Quebec, Canada. Of course, many residents also make the commute to Plattsburgh, NY, via the Grand Isle ferry, which makes several trips daily, 24 hours a day, year-round, with a crossing time of just about 15 minutes. 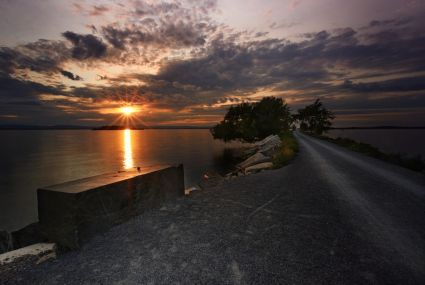 The Islands are a year-round destination though you'll have to survive icy temperatures in the winter. The cold is easy to withstand if you're an ice fisherman, whose huts dot choice spots along the perimeters of the Islands. Fishing is perhaps less of a challenge in the summer when Bass might as well be banging on the hulls of your boats. Participate in golf tournaments, bike touring, boating, swimming, tennis, and apple picking. Attend live concerts in July at Knight Point State Park, Thursdays all summer long at the Snow Farm Vineyard, and sprinkled among its busy season at the Grand Isle Lake House which hosts Island Arts concerts on their sprawling lawns.

There is no shortage of the performing or visual arts in the Islands, thanks in part to Island Arts which has been fostering creativity through education, youth programs, and events (including the Island Arts Craft Show), for over 25 years. The Islands are absolutely vibrant during the warmer months, and for those who choose to make Grand Isle County their permanent home, you'll be thankful for the quiet time with friends and neighbors (and the not so quiet time at the occasional ice derby).

Get the News: Lake Champlain Islander

Learn more about what the islands have to offer:

Contact The O'Brien O'Connell Team if you have questions about the local real estate market or would like to learn more about life in the Champlain Islands, VT.